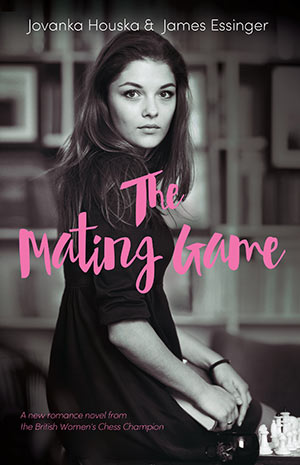 I’m a chess-player – not a very good one. However, I like being involved in the chess world, and I enjoy writing occasional articles for Chess magazine. I’m also proud to have some super friends in the chess profession, including Jovanka Houska.

The origins of The Mating Game go back to about 2005, when I paid a visit to the famous annual Hastings chess tournament and had a memorable dinner with Jovanka - whom I was meeting around then for the first time - and also with her then boyfriend (now husband) Arne, who like Sven – the Norwegian in The Mating Game – is Norwegian. Andrew Greet, the international chess master, was also with us and was as witty and urbane as ever. Jovanka was talking about her life as a professional chess-player and presented the profession as being a mix of extremely hard work at chess, the inevitable stress of competing at a high level and a social life which could sometimes become, let us say, rather heated.

Initially The Mating Game - I had the title in my mind from the very beginning of planning the book - was designed to be a wedding-present for Jovanka, who got married in 2009. At first I didn’t plan to put my own name on the book, but I worked on the book over about seven years altogether – including two full-year breaks during this time to work on other books – and by the time I’d finished The Mating Game I wanted my own name to be on it. I wrote the book, but Jovanka inspired it and we collaborated extensively on the plot.

This is what The Mating Game’s about:

Meet Ivana (‘call me Vanny’) Jones, a sexy, beautiful, warm-hearted professional chess-player. She has a problem: she’s only attracted to guys who can beat her... so what’s she to do when a chess amateur, the Russian billionaire Boris Bogolyubov, proposes marriage?

Not only that, but as Vanny tries to achieve her lifelong dream of becoming a chess grand master, she develops a crush on Norwegian sex-god Sven while also falling for a stunning and adoring French woman. Meanwhile, Vanny’s hoping a revolutionary new drug treatment will save her best friend Charlotte’s life.

The Mating Game is available on Amazon.