Spellbound Quiz - How good is your spelling? 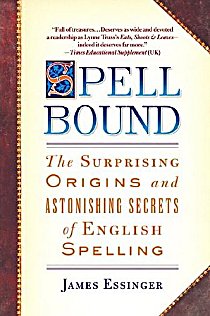 English spelling is one of the most exciting and improbable stories you"re likely to find in the history of language.
My book, Spellbound lifts the lid on the mystery of just why English is spelled the way it is. It's a racy, action-packed, informative and highly entertaining read.
But how good is your own spelling? In Spellbound, I point out that all of us, even if our spelling is on the whole pretty good, have a few spelling bugbears: words we habitually spell incorrectly.
Of course, making spelling mistakes now and then doesn't usually mean that your writing can't be read. But spelling is a convention and if you spell words incorrectly too often, people you want to impress may take you less seriously than you would like.
All the same, there are many words in English whose spelling is so complex that no one can really be blamed for getting them wrong. The National Spelling Bee in the United States is an annual nationwide competition for schoolchildren aged between 9 and 15 that has been going since 1925. It was designed to give clever kids the opportunity to become celebrities at the "sport" of spelling, just as their more sporty counterparts might have a chance to excel on the baseball or American football pitch. (The word "bee", by the way, means, a gathering for work or amusement, or to pursue a specific activity, and derives from the more common use of the word "bee" to describe an industrious insect.)
What"s interesting about the National Spelling Bee, especially for those who believe that standards in education are slipping, is that the words the winner of the nationwide competition needed to be able to spell to win have definitely got harder over the years. The first word winners had to be able to spell back in 1924 was "gladiolus", while in 1930, the word was only six letters long: "fracas". Indeed, in 1932 the winning word was simply "knack". But since then, the words have definitely been getting more difficult. Here are ten of crucial words the winner of the Bee in each year had to be able to spell.

For each year there are three spellings. Which one do you think is right?

1967
A small breed of dog deriving from the Mexican city of the same name.
a) chiahuhua
b) chehiahua
c) chihuahua

1994
Literally, "before the deluge", but taken to mean anything very old.
a) antidiluvian
b) antedeluvian
c) antediluvian

1998
An expert in the treatment of light and shade in drawing and painting.
a) chiaroscurist
b) chiroscurist
c) chiaroshurist

1999
Excessive flow of words. (You may feel this quiz suffers from the same problem.)
a) loggorhea
b) loggorrhea
c) logorrhea

2000
A political step or initiative.
a) damarche
b) demarche
c) dimarche

2005
A note performed just before the essential note of a melody, and normally consistency of half its time value.
a) apoggiatura
b) appoggiatura
c) appogiatura

Now add up your points.
How did you do!

1 out of 10: Your next birthday present should be a dictionary.