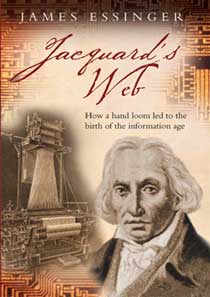 'For as long as I can remember, I've been fascinated by ideas that have changed the world in a practical sense. I remember when I was a teenager sitting on the top deck of a double-decker bus taking me home from Leicester city centre. I was reading Arthur C. Clarke's Profiles of the Future and came to the passage where he writes about the nineteenth-century British computer pioneer Charles Babbage. Babbage's dreams have been the inspiration for much of my own written work to date.'

The next few pages focus on different people and ideas that feature in Jacquard's Web.