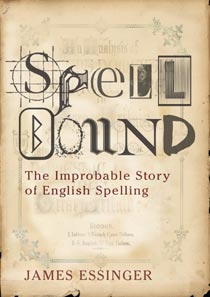 My book, Spellbound: the improbable story of English spelling, involved me on a fascinating journey through 1,500 years of history of the English language – and on an even earlier journey into the very origins of the language we call English, to times when it wasn’t English at all. I think one of the most interesting aspects of this journey was looking at how English evolved from the language Proto-Indo-European, which was spoken about 5,000 years ago.

If you love reading about language and words and the stories of people who made contributions to developing language and words in the past, I really think you’ll enjoy spellbound. I’ve done everything I can to make it a lively and enthralling book. In it, I tell the amazing story of how the spelling of words generally, and English words in particular, has evolved over the centuries from the earliest Egyptian hieroglyphs which are the forerunner of our modern English alphabet. I tell the specific story of English spelling from the earliest runes, to Anglo-Saxon, Middle English, and to the early dictionaries, and up to the mobile phone text messaging of today.

As well as looking at some of the great stories connected with the evolution of English spelling, I also address head-on some of the basic puzzles that perplex so many of us about the spelling of English. For example, why do we spell ‘night’ the way we do, though we pronounce it as ‘nite’? Why do we have so many foreign words in our language? Did you know that English has a tradition of retaining the original spelling of foreign words? Why do we write ‘enough’ but say ‘enuff’? What contribution to the thinking on English spelling was played by the fictional schoolboy Nigel Molesworth? What did King Alfred the Great do for English? What insights were provided by the sixteenth-century Belgian scholar Augie Ghislain de Busbecq? And, if easy-to-spell names are your cup of tea, why is the Egyptian scribe Qenherkhepshef so interesting in the story of English spelling?

Another great reason for buying Spellbound is that it’s really good value for money – more than 250 pages of amusing and informative writing for just £9.99, or maybe even less if you buy it from Amazon! Also, Robson Books have done a really wonderful job of the jacket cover. It looks all nicely weathered and aged, like something you might expect Harry, Ron and Hermione to find on the shelves of Hogworts library. But even though the jacket cover looks wonderfully venerable and ancient, the story inside is brand new. There simply has never been a popular account of English spelling.

I really hope you enjoy Spellbound. I welcome any comments you may have on it, and I might even be able to incorporate them somewhere in the American edition!

Here’s a passage from Spellbound. I hope you like it.

While I was gathering material for this book, I happened to visit a branch of a popular Scottish-sounding fast-food chain in the town of Sittingbourne in Kent. It was a summer’s day, but wet – the sort of day when even if you don’t regret going out without an umbrella at first you will later. I took refuge from the drizzle by partaking of the three major food groups of burger, chips and soft drink. As I carried them to a table, I noticed the following sign at the foot of a staircase leading up to first floor. This is not, by the way, a story writers invent to put in books like this; this really happened. And I’m quoting the words exactly as they were on the sign:

Until the moment when I saw this sign, I’d honestly never guessed that warm, wet weather can lead to a substantial crop of leeks growing on the upper floors and top lobbies of buildings. Nor had I known that these hostile vegetables - rather like the deadly, ambulatory plants in John Wyndham’s science-fiction horror story The Day of the Triffids  - could be so dangerous and numerous it would be unwise to allow anybody to approach them. Still, what do you expect from the only vegetable whose name contains ‘eek!’ Broccoli would be so much friendlier.
Fortunately, it’s only rarely that leeks grow in such abundance as to be so risky to approach, but poor spelling remains a hazard for all of us, and not only for the damage it might inflict on our job prospects, either.